Who Says Santa Claus Is Not Real?

You are here: Home1 / Blog2 / Law of Attraction3 / Who Says Santa Claus Is Not Real? 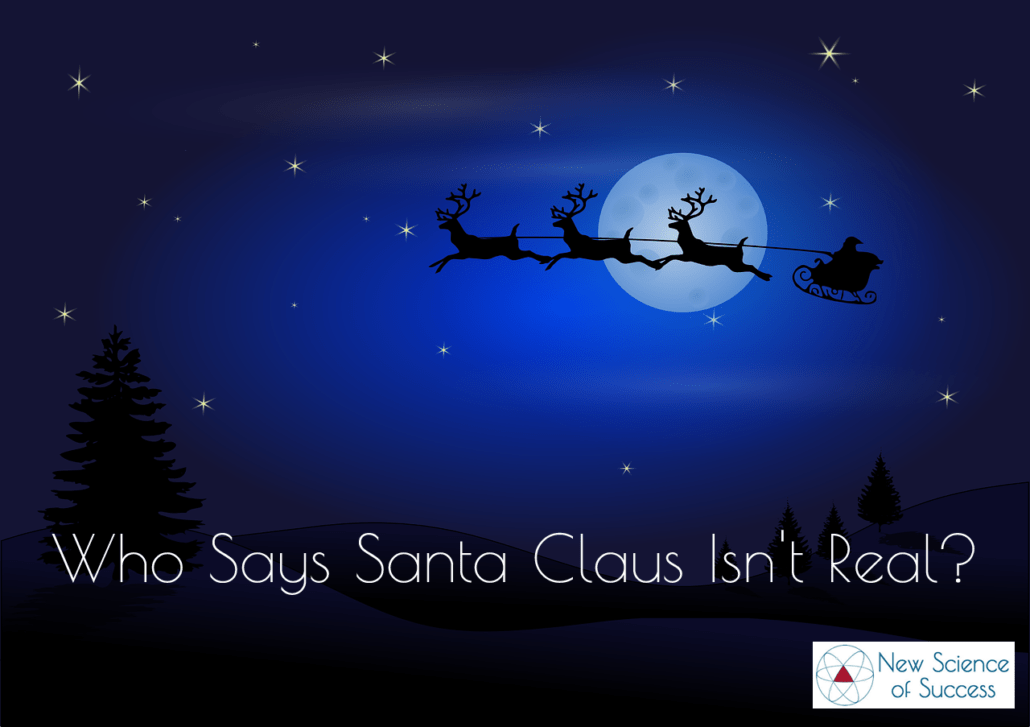 The Universal Truth Behind This Holiday Icon Known as Santa Claus?

Do you remember what it was like when you were a child and you believed in Santa Claus? Those were some of the happiest days of my life. I remember the big old toy catalogs with a seemingly endless selection of toys.

The process was simple. Choose what you would like to receive, write to Santa to let him know your choices and then sit back and wait until Christmas Eve when Santa Claus would deliver your selected toys while you slept. I had total and unwavering belief in this process. And each year I was not disappointed.

I received exactly what I asked for and exactly the way I envisioned it.

I remember spending hours looking through the various catalogs making an initial list of possibilities. With so many options the decisions were tough. But every year I would find the few things that really made me light up and I would add these to my final list. It was so exciting to write my letter to Santa Claus asking him for what I wanted for Christmas.

I could clearly see and feel playing with my selected toys as I wrote my letter. Once I sent my letter off to the North Pole I entered into a state of anticipation during which I never, ever doubted that Santa would come through for me on Christmas Eve.

I believed fully and completely.

The Bubble Is Burst

One of the first moments when limiting beliefs begin to be introduced into a young child’s life is when Santa Claus is revealed as a so-called myth by some well-meaning adult, usually a parent or an older sibling. This cold revelation brings with it a feeling of complete deflation.

Everyone has been lying to me?

This feeling of disappointment fades a bit and Christmas and the Holiday season still seem to hold some magic and wonder because you continue to receive presents that you ask for along with some surprises that you didn’t expect.

The ultimate source of these gifts is your parents. You have faith and belief in your parents similar to the belief you had in Santa Claus. But some of the magic of the season seems to be lost forever.

Fast forward to your adult years. You now are the parent and you get to recapture the magic of Santa as you introduce your young children to this most lovable figure. You get the opportunity to relive your most precious childhood memories through your experience of helping your children build their first experiences with St. Nick.

Keeping the magic of this story going year after year in a child’s life today is more difficult than it was when I was young. There is so much information available on the internet and it seems that kids overall are growing up faster and faster these days. I was not looking forward to the critical moment when I would be asked the ultimate question, ‘Dad, do you believe in Santa Claus?’

Yes Hope, There Is A Santa Claus!

When my youngest daughter reached this most important question in her life I was ready. I clearly remember the day she began to probe me regarding my beliefs about Santa Claus. We were driving in the car and she started by sharing that some of her friends were saying that Santa wasn’t real. I could tell that she was trying to keep her options open. She wasn’t prepared to completely buy into what she was hearing from her friends. If they were wrong and she followed them then she would get nothing for Christmas. That was a risk that was a bit too big for her in that moment.

I realize that you are probably now wondering why I would lie to my daughter. But when I answered the most important question of her young life I answered with complete conviction and belief in my answer. While it is true that a jolly old man in a red suit who delivers presents to all of the children around the world is highly unlikely to exist (even though NORAD does track his sleigh ride around the world each Christmas Eve) I totally believed in the answer I gave to my daughter.

You see, the story of Santa Claus conveys perhaps the most important principle you, me or our children will ever come to know provided we can look past Santa Claus, the mythical person. The story is an analogy or parable meant to teach us of a great power that we all possess. This power is the power of thought to not only influence physical reality but to be the underlying cause of the reality each one of us experiences.

Thoughts are energy. This energy is transformed into physical form through a simple process as outlined in the story of Santa Claus.

This simple process is:

Just as you could choose whatever toys you wanted from Santa, you have the power to choose the experiences you wish to experience in your reality. You do this by creating a focused mental image, a thought, of what you want to experience.

Knowing your desires, your parents went out and purchased your toys. Now that you are grown up, it is you that has to take actions towards your dreams.

You have a unique opportunity this holiday season to contemplate the story of Santa Claus in a profoundly different way. I encourage you to take the first step to harnessing this ultimate power by beginning to experiment with it in your daily life. The great thing is that there is no right or wrong way when beginning to test the power of your thoughts to create your reality.

If you are having trouble deciding how to start, let me make a suggestion. One of the all-time simplest ways of starting to experiment is in finding a prime parking spot in a crowded lot. Now remember that you need to have a clear thought, fueled by strong energy and feelings combined with a total belief that your thoughts will be transformed into the reality you experience.

I think we can all agree that parking at the mall during the holiday shopping season definitely taps into some intense energy and feelings. Have you ever witnessed or been one of two cars that were nose to nose going for the same spot right outside the entrance to your favorite store? The honking doesn’t sound like your favorite Christmas song and the language being hurled back and forth is not conveying glad tidings. You get the picture. Parking spots are a big deal to people especially at the busiest times.

Steps to achieving the parking space you desire:

A way to turbo-boost the thought:

Here is one final suggestion for you that I find helpful when experimenting with the creative power of thought.

I wish you well in your experimentation.
Happy Holidays to all!

LOA Getting What You Want vs What You Don’t Want